As I still hadn’t recovered from a cold I had feared last night’s SISSY BASS would crash me badly but then it hit me all like this: <3

It was wonderful.
Kuedo was a wonderful guest and played such a great daring and inspiring set. Love him for being so uncompromising. What a journey.
Wish I wasn’t so hungover and found more words for it.
Feeling happy and thankful today and love music and the people I share that love with. 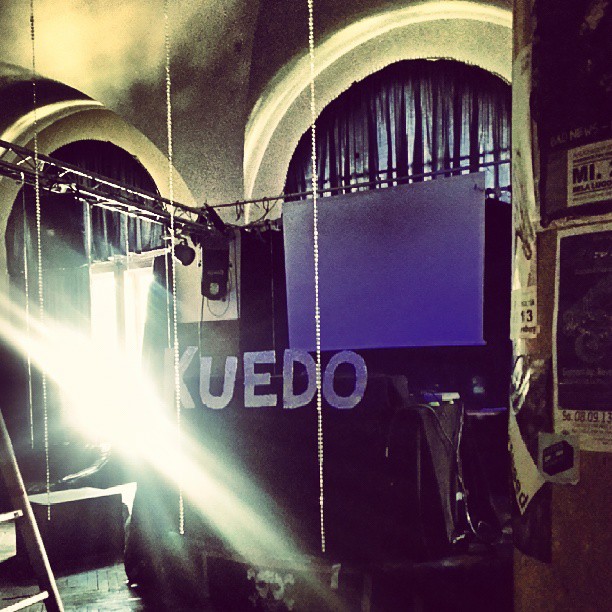 This morning my excitement about two new remixes by Kuedo surfacing was dampened by one of those keeping the – as much as I understand of the lyrics – misogynic words of the original Main Attrakionz track. No big deal? Well, somehow not. On the other hand there are a few artists in that area of music I consider ‘safe’ (meaning I don’t have to brainfilter their music for hate speech) and somehow it hits me harder whenever one of those comes up with such a track.

While I like the music, as a biological woman – how could I not feel at least excluded by misogynic lyrics in a overwhelmingly male-dominated heteronormative music scene as hiphop is? What – because it’s the status quo and it’s just ‘artistic role play’ and it’s all about the beats? Meh. Lame.

Of course sometimes I give in and ignore the words because the sounds are fresh and it’s easier to shut out the meaning of words if they’re not in your main language but every now and then it hits me again how (self-)loathing it actually is to not care just for the sake of some cool beats. And of course it hits me harder when it happens with artists or club nights or venues I don’t expect it from.

At Orchid I once experienced it the other way around when I played ‘Ima read’ and a woman asked me if I really have to play songs that go ‘bitch’ all the time. I tried to explain why it’s different with that track but I wasn’t very successfull (for which I at least partially blame that it’s not quite easy to explain while you’re djing on and it’s late and loud and you’re a bit drunk.) I understand her perspective but on the other hand I sure won’t stop playing artists like Zebra Katz because they exactly are what a part of Orchid is about.

Once more I file this subject under ‘It’s complicated.’

Anyways – finding out about this new P.O.S. clip made up for it. Love it.

P.S.: Of course I stay a devoted Kuedo fangirl, too. After all it’s just a remix and I could just as well argue his cold synths contrast the lyrics in a way that you should read it as criticism… ^^

If you’ve not yet gotten hold of KUEDO’s ‘Severant’ album – do so. It was described more than once as Vangelis’ Blade Runner soundtrack meeting future bass music and that might indeed be the easiest way of describing it. Cold beautiful synths combined with warm deep subs and the whirling funky beats of footwork – trust me, this works even better in the club cause there you can really feel the bass. This is only one facet of what he played last night though. There was (post)dubstep, hiphop, synthpop, rave step, even discoid  moments – lots of different styles and moods but all melt into one big purring ball of music. Pardon my enthusiasm but this was totally my thing.

He did neither bank on only playing what you could expect from his VEX’D or KUEDO releases. Nor did he rely on the weighty safety of outworn simple structured heavy dubstep that still tends to please the ‘my-balls-are-as-big-as-the-bass-in-dis’-part of the crowd. There of course were some heavy parts, too, but none of the simpleboringwobblestep ones. Instead he built a complex set with emphasis and a good feel for aesthetics. Complex, yes – but at no moment it felt overconstructed. He wasn’t fixated on moving along on a beatmatch line but instead played with thrilling combinations and with letting the right bits drop at the right moment.
There are sets that are all about a journey from point A to point B on a rather straight line, creating tension and peaks like on a cruise from one sight to another. And there are sets in which this kind of linearity doesn’t matter at all but that appear more multidimensional and tickle the dancefloor’s g-points as if anything could happen at any time. This might end up in overstimulation and can get a bit much after a while. KUEDO’s set leant more towards the latter of both but managed to keep things in a smooth hovering flow.

There were some real facemelter moments. For me those were some of the footworky percussive bits over beautiful deep sub lines, and also one ace heavy rave breakdown and build-up. There were also some pop and fun moments I loved. Maybe it was just my kind of humour but I had to laugh when he mixed from the ever so (nu-)romantic ‘Moments in Love’ (Art Of Noise, Caspa remix(?)) into some rude rap spitting something about ‘pussy juice, nigga’.

I have given it some thought but still stand to my words of last night: It was the best bass music set I’ve heard so far. It somehow stood for all that still keeps bass music the most exciting and alive corner of electronic music of these days. Thank you, Mr. Teasdale!

P.S.:
I also would like to thank SUB:CITY once more: I love you for having brought us yet another night that was almost like a statement against the brostepification of the dubstep scene and showed that it’s a place for more people than just straight male tough guys. Love your choice of bookings, love what you guys play, love the handmade posters and decoration (especially the grumpy moon!) – I think all this combined brings across that it’s about something like social clubbing.
There again were pleasantly many women on the dancefloor last night where at other dubstep nights there are about as many as in the pit of most oldschool hardcore/punk shows.
Still there were some idiots in the crowd which really sucks cause it only takes a few dickheaded hoolz to spoil the mood for many others. I thought we had the era of fights at the door behind us. It’s tiring. Still I think that it was a great night for almost everyone!