I have finished two books that I had been carrying around with me far too long. It feels quite good. David Mitchell’s The Bone Clocks was one of them. I loved the first part. It told the story of a tomboyish UK girl in the 80s, who runs away from home for reasons a grown-up could find hard to understand but Mitchell manages to get across just fine. I enjoyed the next part, in which Mitchell portrays a group of young bon-vivants on a skiing trip with all their fun and desires and secrets. Where he lost me though was the really long middle part about a middle-aged white male writer who is very much in love with himself. War reporter, author of books. It drags and drags and drags. It made me drop the book for at least half a year before I went on, still not managing more than a few pages in a row. At some point though the book picks up pace again and it ends just as intense as it starts: In a dystopic future setting in which the young girl from the start has turned into an old woman. Of course there is magic too, a battle of parasitic timelords is the arc that is meant to hold the book together but, well, magic realism can get quite boring when it loses itself in endless new plots just to show how in the end the almighty author manages to show how everything is connected. I got a love/hate relationship with magic realism ever since I have read Rushdie’s Midnight Children (which I liked). If you got no clue what magic realism is about, just check the magic realism bot on Twitter. It’s the essence. Though he creates rich worlds and characters, in The Bone Clock Mitchell sometimes loses grip of the tension that holds a novel together, so in short: This book is too long but when it is good it is really good. 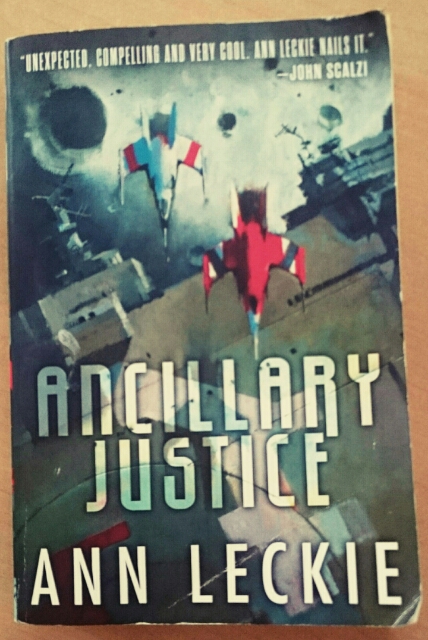 The other book is Ann Leckie’s Ancillary Justice. It is a tough read if you only find time to read in short spans every other day because it is a bit complex. But I wholeheartedly recommend it if you have got the time for long reads and sinking your teeth in. Which I finally have now that I am on holiday. It is a sci-fi novel told from the perspective of a soldier who used to be Justice Of Toren, a spaceship with an AI that connected many soldiers. So the main character is not just a spaceship but also hundreds of people, all connected with each other in one mind. To be even clearer: dead humans made into soldiers. A bit like the Borg idea but also not at all like it.  It is identity sci-fi, playing with what makes a person a person but also with gender (everyone is a “she”  – or are they?), power relations  and colonialisation. Of course there are splendid fighting scenes too and there is as much social bonding as an AI soldier can be imagined capable of. The book is heavy on the world-building side which I usually do not enjoy that much – endless descriptions of planets, space tech and alien cultures are not my thing – but Leckie does it in doses that don’t neglect the storytelling. I will definitely get the other two parts of the trilogy, too.

P.S.: This is my first time blogging from my phone. Wifi here in the mountains is a bit shaky and this seemed quicker.